Where are the Workers?

Where are the Workers? 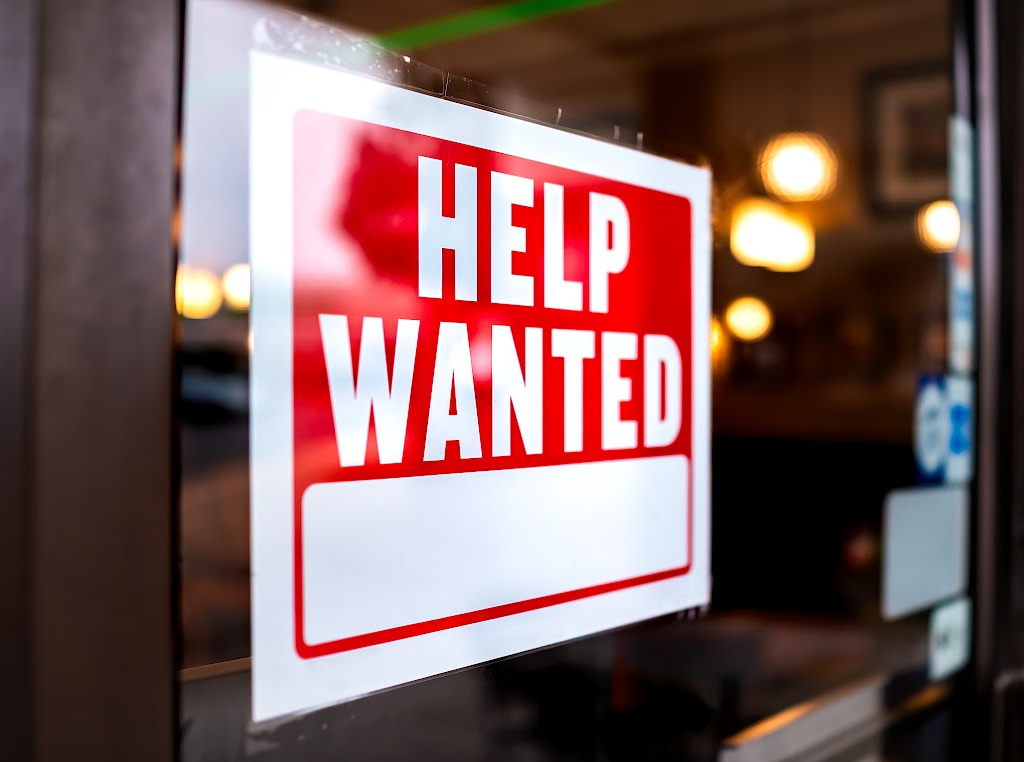 “Every business I enter is looking for employees” was a common refrain in our Carolina Across 100 survey, with 79% of the total survey sample selecting employment/staffing concerns among their top three negative impacts of COVID-19 on their organization. Is the staffing shortage just a function of COVID-19 that will correct itself as COVID abates or are there larger demographic and economic forces at work? The answer is a bit of both.

A prediction of slow growth becomes the reality

Well before the onset of COVID-19, economists worried about slowing labor force growth resulting from demographic changes. In fact, UNC Economics Ph.D. Jonathan Pingle, co-authored a well-known Brookings study in 2006 which forecast that with all else equal, the labor force participation rate – the share of the population who are working or looking for a job – would continue to decline from its peak in 2000 as a result of the aging of the population. As the chart below illustrates, Pingle and his co-authors’ forecast came to fruition. This has not meant outright declines in the number of workers, just slower growth. In the ten-years prior to the onset of COVID-19, the civilian labor force grew just 0.7% per year versus 1.2% in the 10-years prior to the Global Financial Crisis/Great Recession in 2008 (shaded areas in the chart represent economic recessions). 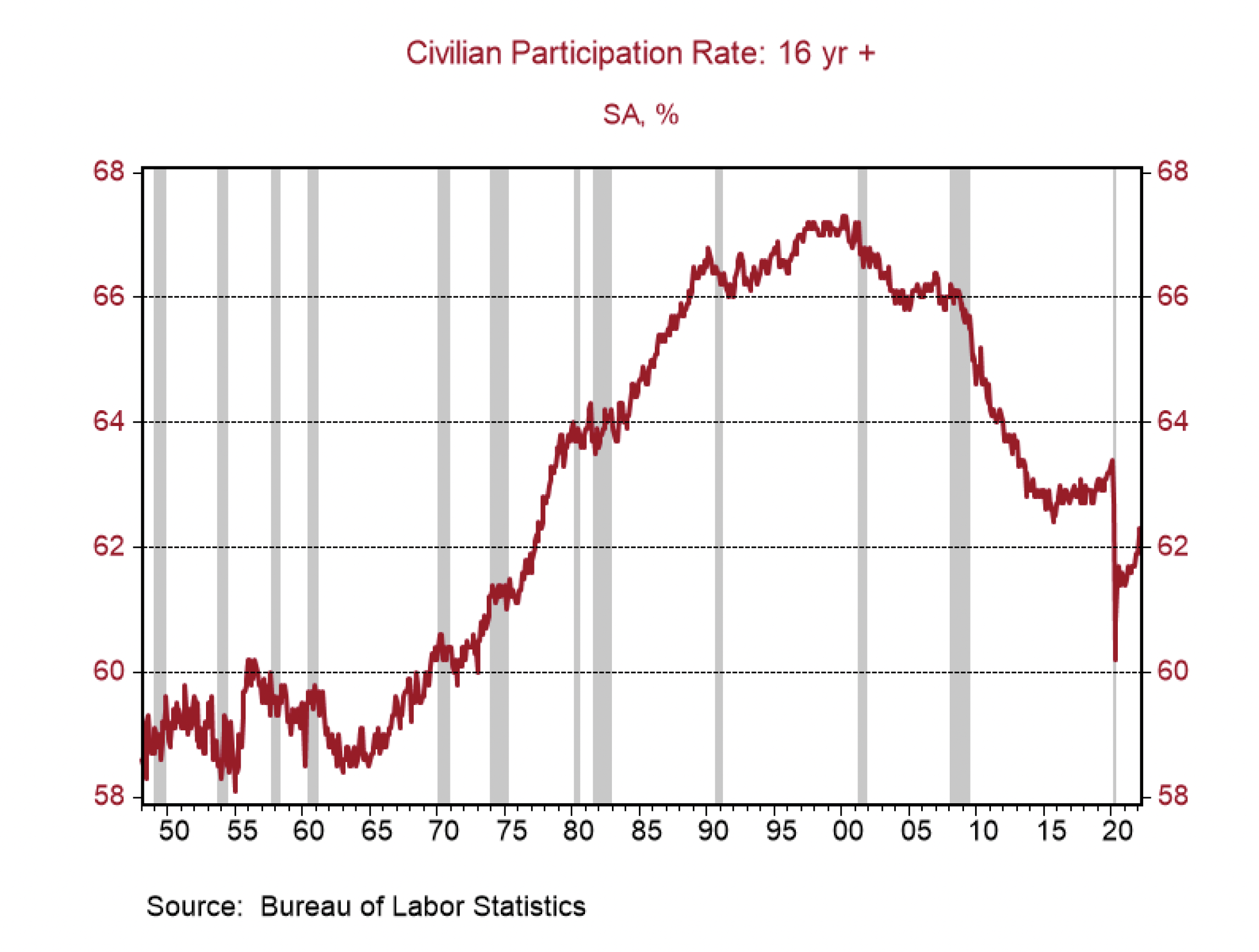 As the chart illustrates, COVID-19, like the Global Financial Crisis, exacerbated existing trends. In the spring of 2020, people dropped out of the labor force because either their jobs did not exist anymore, they were not comfortable working, they had caregiving responsibilities, or they re-thought their work situation. As the chart illustrates, some set of the population has re-entered the labor force, but we are still well below pre-COVID levels.

While it is challenging to discern trends given the uncertainties created by waves of COVID, the data suggests signs of both trouble and hope. The participation rate for women aged 35-44 has been particularly hard hit, which is not surprising given many women are facing uncertain caregiving needs because of COVID-19. And, while there has been some shift in peoples work choices, as evidenced by the drop in participation of workers aged 55 and older, it is also hard to imagine that the rising wages we are seeing (up 5.1% in the year ending February 2022) will not bring some reluctant workers off the sidelines, especially as COVID-19 (hopefully) recedes.

Similar trends in our state

As the chart below illustrates, North Carolina has experienced similar trends in labor force participation as the rest of the United States, though on the face of it, recent data is more concerning. The gap between North Carolina and national participation rates, which moved from consistently positive to consistently negative in the mid-to-late 2000s, continues to widen. The latest data indicates that North Carolina’s participation rate is 2.5 percentage points lower than the U.S. average. This suggests why labor shortages may be particularly acute in North Carolina. Interestingly, this occurred during a time when both job and population growth in North Carolina outpaced the rest of the U.S. Thus, we feel that there may be more to the story than these numbers illustrate, which is why the Kenan Institute of Private Enterprise is embarking on a Labor Market Indicators project which will allow us to dig more deeply into regional data and explain the underlying forces behind these trends. 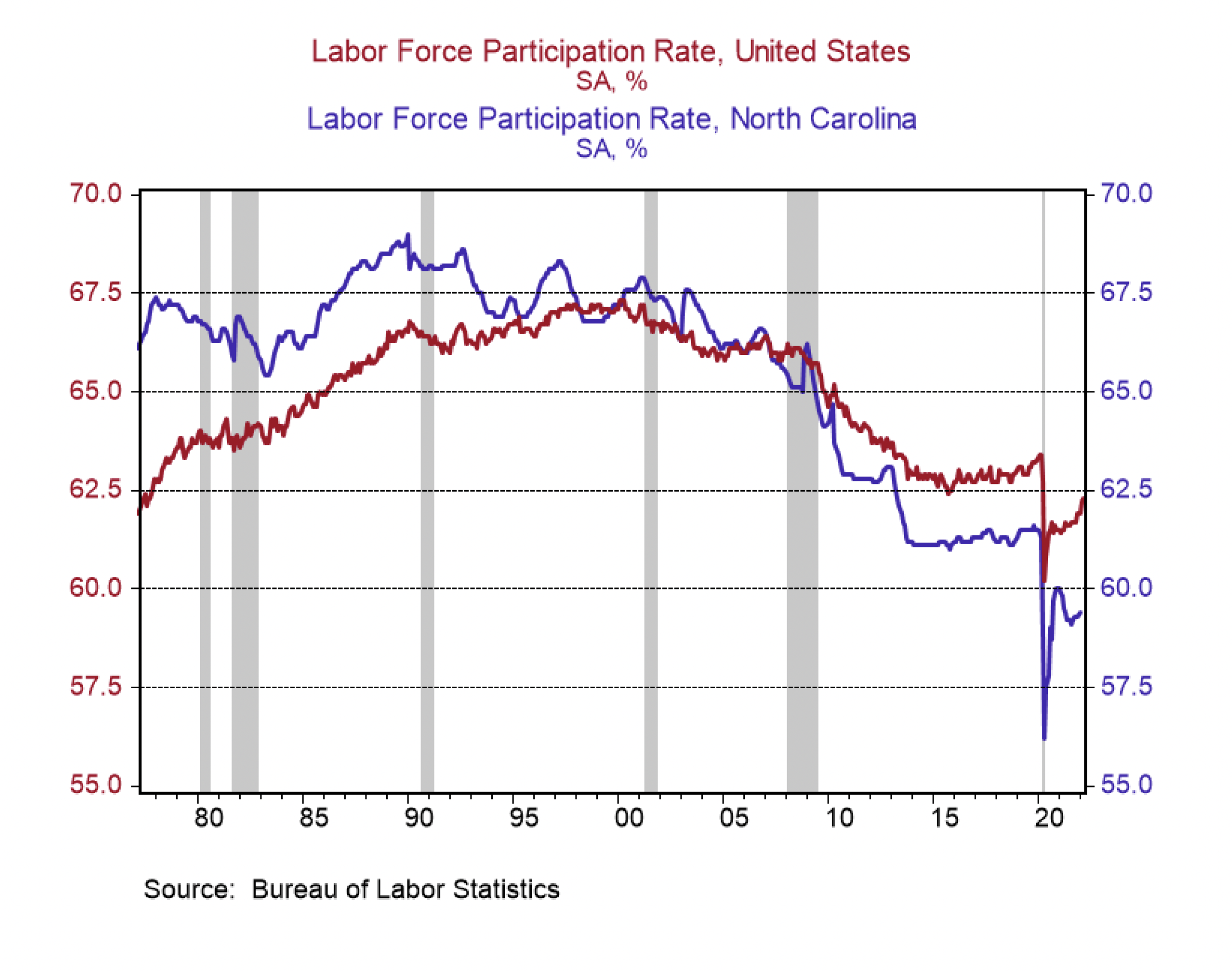 While the August Comte saying ‘demographics is destiny’ remains true, the pace of decline in labor force participation is not immutable. As the first chart illustrates, participation rates rose substantially in the 1970s as there was a surge of women entering the labor force. However, participation rates for women never reached the same level as men – and they still remain over 10 percentage points lower today. The gap between male and female is much smaller in countries such as Sweden, which have universal child care and generous paid leave programs. Some argue that the United States employment dynamics are different, but this is counteracted by recent research from Kenan-Flagler Business School’s Paige Ouimet and Turk Al-Sabah which indicates that mandating paid sick leave in states and localities in the United States increased the supply of labor. Thus, while the aging of baby boomers is likely to continue to weigh on the labor market, there are policies such as paid leave and expanded worker training programs which can soften some of the blow. These would be especially beneficial in North Carolina with its underperforming participation rate.

UNC-Chapel Hill’s Carolina Across 100 initiative is a 5-year program charged by Chancellor Kevin Guskiewicz which will partner with communities in all 100 North Carolina Counties to aid in pandemic recovery and help build resiliency. Stay connected with Carolina Across 100 as we continue to share data and resources.