Economic First Responders: How Government Stepped in to Help

Economic First Responders: How Government Stepped in to Help 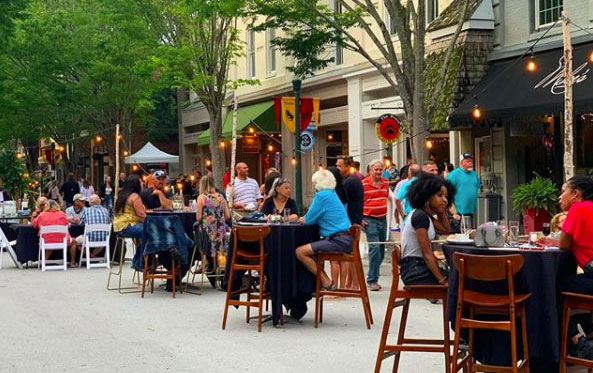 Federal, state and local governments worked hard to sustain entrepreneurial ecosystems, and especially small businesses, during the COVID-19 pandemic. Many of these programs were successful in helping businesses stay open during desperate times.

The Trump administration and Congress acted swiftly to support small businesses amid widespread shutdowns, launching the Payroll Protection Program (PPP) in April 2020. Although the program ran through its funding in just 13 days, PPP was reinvigorated with a second wave of funding within two weeks. Additionally, many state and local governments made emergency funds available to provide support to their struggling small businesses. In fact, North Carolina introduced several programs including RETOOLNC, a grant program aimed to Historically Underutilized Businesses (HUB) and Disadvantaged Business Enterprise (DBE) firms impacted by COVID-19.

These lifelines were maintained and expanded as the initial shutdowns ended, but the pandemic pain continued. A year into the pandemic, President Biden signed into law the American Rescue Plan – a $1.9 trillion economic stimulus package offering an extension of PPP – along with several hard hit industry-focused relief efforts including $28.6 billion in grants focused on revitalizing restaurants and $3 billion to support aviation manufacturers, among others.

The first round of PPP received scrutiny since some large and public firms were eligible to receive funds, even though program was geared toward small business. Additionally, research shows that banks played an important role determining where the money flowed, which partially explains why some funds initially went to regions that were less adversely affected by the pandemic – leaving underbanked regions, including many communities in North Carolina, more likely to experience lower levels of PPP lending as compared to areas with greater bank competition. Compounding the challenges, research indicates that Black-owned businesses received loans that were approximately 50% lower than observationally similar white-owned businesses. However, this effect was marginally smaller in areas with more bank competition and disappeared over time as the government made changes to the PPP program.

The challenges the federal government faced when funneling dollars to those most in need speaks to the disconnection that can occur between those who develop policy and the agents in charge of overseeing implementation – in this case, most notably, the banks. However, policymakers worked to address these access issues, and by the time program sunset in May 2021, the data indicates that rural-owned, minority-owned, and women-owned small businesses were able to access more of the funding. However, it is important to note that PPP demographic data has been limited. Some of the notable changes to PPP included prioritizing businesses with 20 or fewer employees, and allowing sole proprietors and contractors to be eligible. Now the government is tasked with determining an equitable and straightforward path toward loan forgiveness.

The government at both the state and local levels played an integral role in the pandemic response for small businesses. In particular, many state and local governments provided emergency funding, often more quickly than some larger federal programs could. Additionally, many municipalities created loan and grant programs that specifically targeted support for small businesses.

Throughout the pandemic, local governments were on the front lines trying to keep their main street businesses afloat. Beyond funding, they had other policy and programmatic mechanisms at their disposal including offering relief by deferring payment deadlines for utilities, taxes and licensing fees, as well as helping businesses navigate the evolving array of programs and resources available to them. Some of the most successful local-level programs included targeted efforts to reach the hardest hit groups, and paired loans with programming and events that encouraged residents to support local businesses. For example, many local governments created marketing campaigns that promoted local businesses and made zoning changes to allow more outdoor dining. To make these programs successful, government leaders had to work across departments and alongside community partners and businesses.

To see case studies of how North Carolina communities supported their small businesses during the pandemic, see Homegrown Tools.